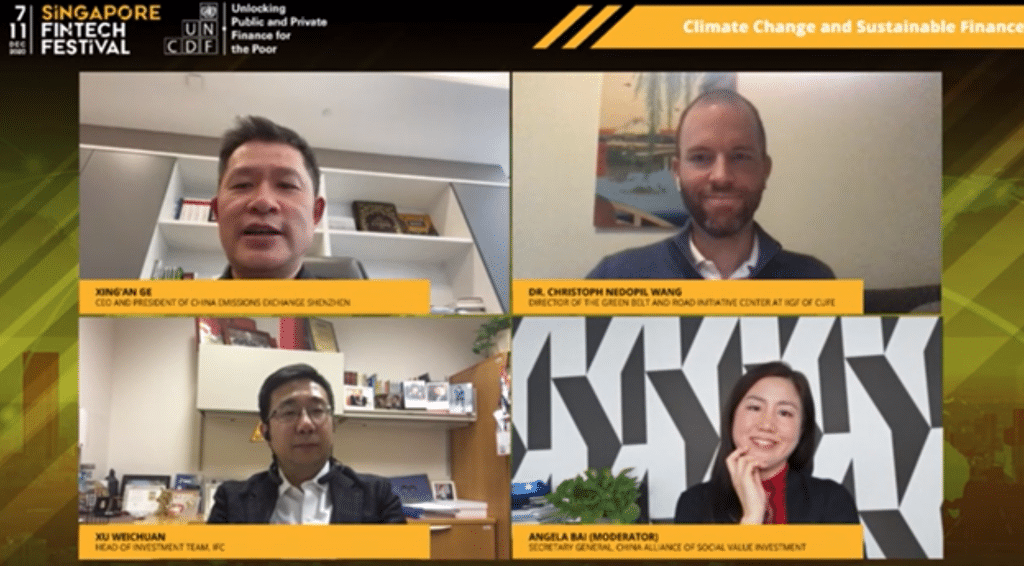 From 7 to 11 December, the UN Capital Development Fund (UNCDF) in partnership with the Singapore Fintech Festival (SFF) organized a series of events across multiple countries called the “Building Inclusive and Resilient Economies in the Digital Era”. Dr. Christoph NEDOPIL WANG, Director of the Green Belt and Road Initiative (BRI) Center at IIGF, was invited as a speaker to join the panel discussion on 10December.

In the one-week event, more than 30 sessions under the theme “Building Inclusive and Resilient Economies in the Digital Era” were organized and attended by thousands of participants worldwide. The event aimed to build a community of practice that contributes to inclusive digital economies and builds financially resilient societies. Policymakers, senior government officials, industry leaders, and academics were joining to explore various avenues for driving the SDGs using digital tools.

Under this theme, UNCDF and SFF organized the panel discussion on Climate Change & Sustainable Finance on 10 December, to discuss the potential risks and opportunities in the digital era on climate change and sustainable finance.

The participants started by discussing the readiness of China and global sustainable finance against climate change call. Dr. Christoph NEDOPIL WANG emphasized that China has made strong progress in developing its green finance system in the last years and now is focusing also on developing climate finance even further, particularly after the 2060 carbon-neutrality pledge by Chinese President Xi Jinping. While China still increases its carbon-emissions at this time and has even seen an acceleration of carbon emissions since 2016, green finance can play a stronger role in setting incentives for green investments and phasing out dirty investments. To support this development at home and particularly in the Belt and Road Initiative – China’s overseas investment strategy – the recently launched Green Development Guidance for BRI Projects of the BRI Green Coalition backed by the Ministry of Ecology and Environment has developed a traffic light system that categorizes projects according to their climate, biodiversity and pollution impacts into “green”, “yellow” and “red” – with fossil fuels being “red” and thus discouraged projects, while solar-energy would be “green”.