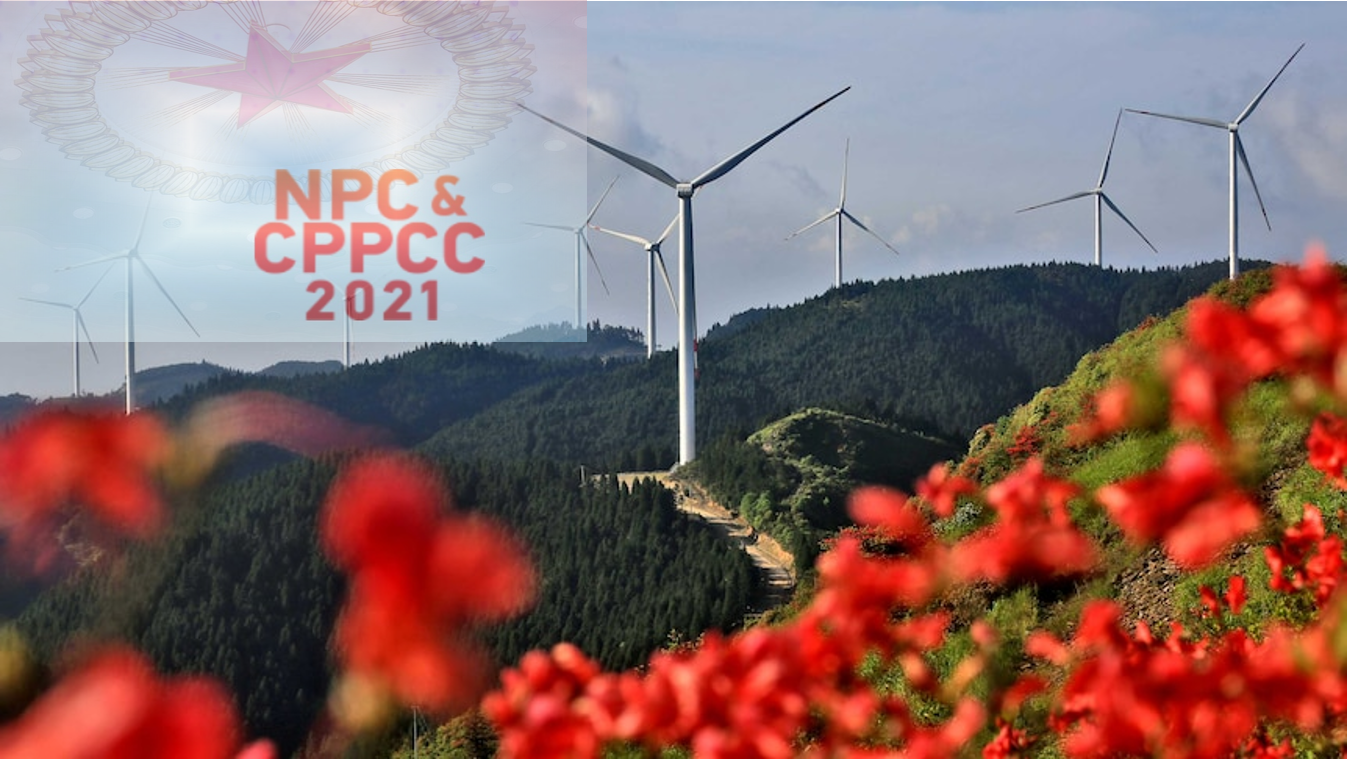 On March 5 during the “Two Sessions”, China introduced its 14th five-year plan for 2021 to 2025, as well as the Government Work Plan. In it, China vows to focus on “green development”, to uphold the “30-60” promise of Xi Jinping for China to try to peak carbon emissions before 2030 and be carbon neutral by 2060 and to be a role model for climate governance in the world. Accordingly, it announced to “expedite the transition of China’s growth model to one of green development”, improve carbon emission intensity (the emissions produced by one unit of GDP) by 18% in five years, its energy intensity (the amount of energy used for one unit of GDP) by 13.5%, and to increase the share of renewable energies to 20%, from today’s 15%.

But, analyzing these announcements reveals that current ambition levels should be seen as a baseline, as current targets risk undermining global climate goals: If China achieves its emission intensity reduction target of minus 18%, China’s CO2 emission could increase by up to 10% by 2025 compared to 2020, if annual GDP growth reaches 6% over the next years (China hopes to reach more than 6% in 2021 and Deutsche Bank predicts a 10% GDP growth for China in 2021). To put that into comparison: With Chinese current emissions of well above 10 billion tons per year, another 10% of CO2 emissions would be equal to the current emissions of the UK, South Africa, and Egypt  – combined. If these additional annual emissions would come from one single country, this country would be the world’s fourth largest emitter (after China, US and Russia).

While China has featured its strong climate and green ambitions ever more prominently over the past months, the China’s 14th five-year plan did not accelerate China’s climate ambitions compared to the 13th five-year plan (2016-2020). This stands in contrast to many developed and developing countries that have accelerated their climate ambitions over the past years: not only the EU and the US, but also many emerging markets, such as Pakistan, Vietnam, Bangladesh, have put in place measures to accelerate emission reduction, e.g. announcing a ban on coal investments, or by announcing an absolute emission reduction goal in their NDCs or at least a cap of maximum emissions and by focusing their recovery plans on renewable energies.

In consequence, more specific plans should be drawn up to use the five-year plan as a baseline: higher immediate reduction of intensity are possible, e.g. by accelerating the use of green finance for renewable energy investments, energy efficiency investments and phasing out of polluting investments. After all, every increase in emissions over the next years makes China’s ambition to be carbon-neutral by 2060 ever more difficult.

Since 1990, China grew its GDP by almost 40 times and its GDP per capita by almost 32 times, according to World Bank data. With GDP growth, emissions grew as well: from 1990 to 2020, China increased its emissions from 2.4 billion tonnes to over 10 billion tonnes, making it the country with the largest absolute greenhouse emissions and also surpassing the EU in regard to per capita emissions in 2016, despite a GDP per capita of about 40% of the EU.

With China’s climate footprint mattering more than almost any other country, its signature of the Paris agreement in 2015 was paramount. In it, China agreed to limit global warming to less than 2°C by 2050 and therefore, effectively, agreeing to a climate-neutral economy by 2050.

In September 2020, Xi Jinping “specified” China’s climate commitments and vowed to strengthen efforts to peak China’s carbon emissions before 2030 and be carbon neutral by 2060. This announcement, despite being a de-facto revision of the Paris Agreement, received much praise in China and the international community.

One hope was that China would strengthen its climate and green ambitions, particularly through policies expressed in its five-year plan, which sets the strategic economic and social development trajectory of China. Such a strengthening of climate ambitions could have included an absolute cap of greenhouse gas emissions, which so far is unspecified in China, or a clear trajectory of emission reductions. Yet, the five-year plan published on March 5th, 2021 offers not much news compared to its predecessor published in 2016: Most importantly, China vows to reduce its emission intensity by 18%, energy intensity by 13.5% and to increase the share of renewable energies to 20%, from today’s 15% (see above).

While this may sound ambitious at first sight, the impacts on climate when using the five-year plan’s goals verbatim will lead to up to 15% higher emissions for China, and thus up to about 4% more global emissions.

To calculate China’s future emissions, energy needs and energy shares, this article uses 2020 as a baseline year. All values (e.g. GDP, energy efficiency, energy use, emissions) in the baseline year are set at 100. Accordingly, based on the growth plans and the targets, values can be calculated, e.g.

However, as China has not officially set a GDP growth target for the 2021-2025 time frame, while it hoped to achieve well above 6% GDP growth in 2021, this articles takes two different scenarios based on realistic growth goals over the next 5 to 10 years to calculate emissions and energy needs: 5% and 6% GDP growth per year. Furthermore, to compare China’s historic CO2 emissions, this article uses World Bank data. To calculate possible peaks of emissions and energy needs, this article assumes a continuation of China’s economic development based on the targets of 13th and 14th five-year plan until 2030 and beyond. Therefore, emission intensity reduction targets will remain at 18% over the next 10 years, energy efficiency reduction targets will remain at 13.5% and GDP growth will remain at 5% and 6%.

Assuming China can accelerate the use of green finance and keep up previous improvement of its emission intensity of 20% in 5 years, peaking of China’s emissions would happen in 2028 – two years ahead of the 2030 target. In this scenario, China would emit about 8% more of carbon emissions compared to 2020, or 462% more emissions compared to the 1990 baseline.

Table 2 provides an overview of the impacts of the 14th FYP on the energy needs.

China’s climate leadership in the BRI

China wants to “play its part in the global response to climate change”, according to Li Keqiang’s government report at the Two Sessions, it wants to “make a contribution to lead in global climate governance”, according to the State Council’s Guiding Opinions on Green and Low Carbon Circular Development and “lead the way by example” in developing a greener future.

A particular focus of China’s leadership abroad is its Belt and Road Initiative (BRI). China is investing billions of dollars into BRI countries to improve infrastructure, particularly energy and transport and providing capacity building to “build a green Belt and Road Initiative”.1 Accordingly, China is investing an increasing share of its energy investments in the BRI into renewable energies.2

Emission intensity in the Belt and Road Initiative

Energy intensity in the BRI

Looking at data on energy intensity in the BRI (see Figure 5), one can see that many Asian BRI countries, such as Russia, Mongolia, Kazakhstan, as well as some African countries, like South Africa and Mozambique, require relatively more energy to generate their GDP. China’s is the 14th most energy intense of the BRI countries. This stands in contrast to most African and Eastern European BRI countries that have a higher GDP output per unit of energy and thus use less energy to generate economic growth.

A number of BRI countries have announced to phase out coal investments or have cancelled coal-fired power plants to focus on renewable energy investments and reduce carbon emissions. Among these countries are

Recommendations for increased green investment and finance for China’s climate leadership at home, in the BRI and for the world

In order for China to fulfill both its domestic and global pledge to focus on green development and adhere to the Paris agreement, it seems that China’s 14th five-year-plan provides ideally a baseline, rather than China’s maximum climate ambitions. Based on its historical achievements, China’s has the ability to achieve higher emission intensity reductions: between 2005 and 2010, China reduced its emission intensity by 45%, from 2010 to 2015 by 37% and from 2015 to 2020 by 20%, according to own calculations based on World Bank data.

Thus, with relevant policy and financial support, a much faster transition should be possible. One important aspect to accelerate China’s climate ambitions and thus to protect the global climate is to increase the use of green finance to accelerate more investments into green assets, while accelerating phase-out non-green investments. China has championed regulation on green finance, particularly since 2016, and relevant regulators (e.g. PBOC) are currently revising the green bond catalogue and disclosure frameworks.

Besides disclosure and green bond catalogues, policy can play an important role both domestically and in the BRI along following dimensions to increase demand for green finance and investment:

Overall, the opportunity for China to lead in climate change by example through the application of policy, domestic and international green technologies, domestic and international green finance and a large market are on the horizon – all while accelerating China’s transition to a green and high-quality economy. Yet, to achieve this goal China would need to develop more relevant ambitions and walk the talk for a de-facto implementation of the goals.